Flies and wasps can be a great nuisance, especially when they begin to penetrate deeper into your home and start invading your living room, kitchen, etc. You may have tried many things to get rid of these annoying six-legged flying pests, but nothing seems to work. Running around after a lone housefly with a swatter in your hand can be a really tiring experience, and if you have a can of bug spray, you can’t really use it that freely around your living space because the spray is not only toxic to flies, but also to humans.

Instead, what you need is an anti-bug weapon or a bug gun. If you’re ready to go out there and get rid of all these irritating pests in your house, it’s time to buy one of these bug exterminating machines and start shooting at flies, roaches, etc. Check out the 4 amazing bug guns that we have listed below, and see if you agree with our choice for best fly swatter gun. 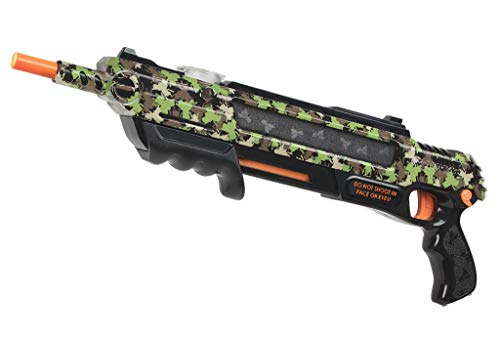 This is the improved “version 2” of the original BUG-A-SALT salt gun (featuring a camouflage finish), that has become quite famous for its ability to cleanly kill flies from a range of over 3-4 feet. The original (version 1) was really well received by people due to its reliable design and immense bug-squashing power (that’s not an actual term). The way this gun functions is, you load some regular table salt into the loading hole on the top of he gun. Then you cock it once per shot, and you need to retract the safety switch to “firing” position before you press the trigger.

When you take your aim and press the trigger, a pinch of salt is released at really high velocity towards the unfortunate fly, which is completely dismantled by the force of the salt granules striking against its body. Once you fill the loading chamber, you can shoot nearly fifty times, and the best way to shoot is to stand about 3 feet away from the fly (or roach, spider, etc.), and aim the plastic sight at the fly. The more flies you hit in one shot, the more you get out of each shot. Remember – this is a spread shot weapon just like a shotgun, which is why its power and accuracy decreases over distance, and it is practically ineffective beyond 6 feet. 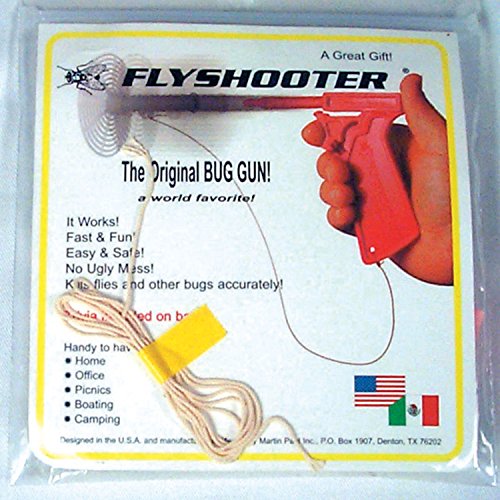 If you want to kill a couple of flies that are bothering you, but don’t want to splatter your walls with bug blood, this gun is a really inexpensive option that every fly hater is going to love. It is the simplest gun in the world, and literally consists of a spring inside a barrel, with a plastic handle. The projectile is a little circular swatter that is designed to fly though the air with minimal drag, and it is propelled forward by a compressed spring inside the barrel.

If you want the power of a handheld swatter, you’ll be disappointed, because this thing relies on a spring. Once you shoot your swatter, you can retrieve it by using the string that is provided alongside this product. Attach one end of the thread to the base of your handle, and the other end to the swatter. No matter whether you hit or miss, you can always pull the projectile back from wherever it lands, using the lightweight string.

The Martin Paul Mosquito/Fly gun is based on the same old spring-loaded disk design as other anti-fly disk guns out there, but this one features a unique tweak in the design which enables you to efficiently and quickly take down the bugs without splattering them all over your wall or floor. Disgusting as bugs are, cleaning up their entrails from the floor can be even worse.

So what the Martin Paul gun does, is it uses a specially designed spring loading system in the barrel that adds a bit of spin to the disk before sending it towards the fly. The spinning disk is less prone to deviating from its trajectory, just like a football spinning through the air. This means that the fly will never be able to escape your shot, and the spinning motion evenly distributes force across the fly’s body, rather than delivering it all in one single thump. So no excessive splattering occurs, and you cleanly take out the bug with just one shot. 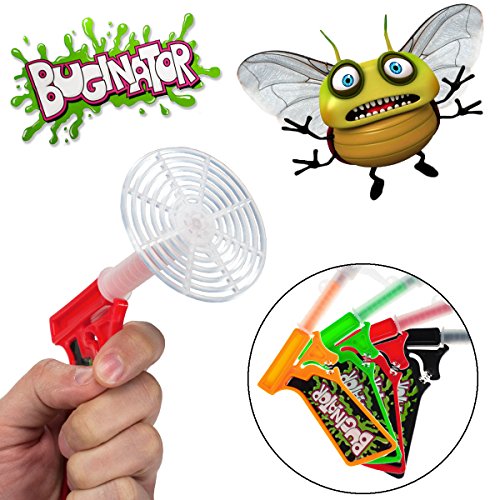 Armed with a spring loaded 2.5” plastic swatter disk, the Buginator is available in a variety of colors and is a really fun to use device. It is simple, cheap, and performs flawlessly. The disk could use a thread attachment, so you don’t accidentally lose it. Besides, a thread allows you to easily pull the disk back into your hands so you can reload the gun for another go.

Although no thread is provided in the box, pretty much any thread will do as long as it is lightweight, thin, and doesn’t have fibers sticking out of it. The gun itself is very compact, so your kids are going to love it. It measures just 4.5” x 4.5” in length and width respectively, and the spring is durable as well as powerful enough to generate sufficient force for splattering houseflies. The device is best used for squashing flies that are sitting on walls, but it can easily stun or even kill flies that are flying in the air.

There are many types of bug-killing contraptions out there, most of which are nothing more than toys, but some actually do the job quite effectively. A salt gun is a prime example of an effective fly murdering weapon. It looks like a real gun, but the resemblance is quite limited. Salt guns are more like water guns rather than real guns, and look quite similar to water guns. While you can’t kill flies with water guns, you sure can snipe a fly with one of those salt guns. These shoot pinches of salt at high velocity, and the salt goes out in a spread pattern, like the spread shot from a common shotgun. Salt guns are operated by loading some ammo (salt) in a chamber, and then building up pressure in an air chamber by cocking the gun.

When you press the trigger, the built up air pressure in the compressed air chamber is released into the barrel, along with some salt from the ammo chamber. This results in a high velocity salt spray that can go as far as 3-6 feet. The spray will not be tough enough to penetrate the shell of armored insects such as beetles and giant hornets (never ever shoot a giant hornet or its nest with one of these guns unless you are trying to get yourself stung by a bunch of angry hornets), but the salt grains will easily penetrate the smaller squishy bugs such as flies, roaches, small spiders, etc.

If you’re looking for something less costly, then a spring-loaded swatter would be a great option. These are like regular swatters, except for the fact that they use a compressed spring to eject a small swatting pad at a fly. So you don’t have to run after the bug like a maniac, instead you can just stand back comfortably, take your aim, and shoot the plastic projectile using the energy of a compressed spring. Simple, but it is not the most powerful option out there. It should still be a great way to have some fun, and improve your overall aiming skills. Kids will love these guns, and can test their fly hunting skills with one of these relatively cheap toys.