Let’s face it: there’s nothing worse than your SUV that won’t start when you need it to. Unfortunately, most of us don’t plan for that eventuality, and we risk either calling for expensive roadside assistance or asking strangers for help with a boost. Yet it doesn’t have to go down that way.

With today’s range of jump starters, getting your SUV going never has to be something you’ll have to worry about. But with a range of prices and features available on the market, knowing how to choose the best emergency jump starter for your needs can be tricky. In this article, we’ll take a look at four models and help to take the guesswork out of the equation for you. 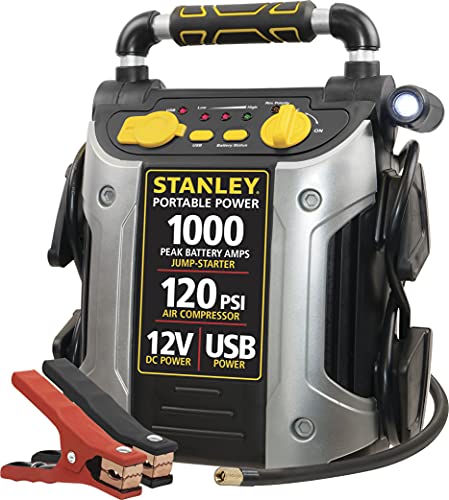 A critical consideration to make when buying a jump starter is the amount of starting power or starting amps, that the unit offers. Depending on how depleted your SUVs battery is, the more available starting power at your fingertips you have, the better the chance that you’ll get it going. Striking a balance between budget-friendliness, power, and available features, the Stanley J5C09 FATMAX jump starter is a worthy tool in anyone’s emergency preparedness chest.

The FATMAX definitely packs a starting punch. With 500 amps of nominal cranking power output and a peak available of 1,000 amps, this jump starter has ample power for most situations. It’s designed for the novice user, featuring a polarity alarm that will alert you if you hook it up incorrectly. Additionally, the built-in 120psi air compressor allows you to top up your tire pressure on the go. Two onboard USB ports mean you can charge your electronic devices on the go, a very handy feature indeed.

The unit is not without its flaws, though. For one, it lacks a float charging system, meaning that it needs to be manually plugged into an AC outlet at regular intervals to maintain it’s readiness. It’s on the heavy side, weighing in at nearly 15lbs. Finally, the air compressor hose has been deemed as being too short by some. Still, for the sheer cranking power and included features, the Stanley J5C09 is an excellent value, offering a mix of portability, budget-friendliness, and variable uses.

Buying a jump starter doesn’t have to be an expensive proposition. Indeed, DBPOWER’s budget-range DJS40 offers up a decent amount of starting amperage to get your light SUV up and running. The unit features 300 amps of starting power, which is fine for most car starting situations. A huge plus for this starter is that it’s lightweight and portable, weighing in at a scant 1.3 pounds, meaning you’ll have no problem keeping it on hand and having it there when you need it. And while it lacks the higher-end features of the Stanley FATMAX, the DJS40 does come complete with a USB port for device charging. It’s definitely worthy of being on our best emergency jump starter list.

Moreover, this model is fairly easy to use and is designed for simplicity. Simply hook it up to the battery terminals and an LED light will indicate when it’s ready to start. While it doesn’t come equipped with the polarity alarm that the Stanley FATMAX features, the DBPOWER jump starter does feature safety tools such as overcharge and short-circuit protection.

The 300 amps should be enough to start light SUVs in most conditions. However, for a severely depleted battery, or for starts in extremely cold conditions, the available power may not be enough. In any case, customer reviews have been very favorable for the most part, making DBPOWER’s DJS40 jump starter a very budget-friendly way of buying peace of mind when you need it. 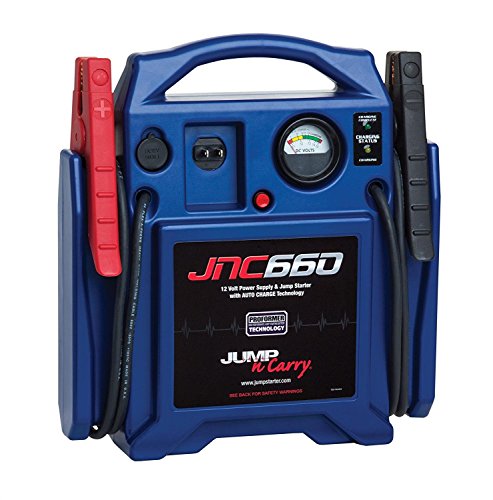 If budget is not a consideration and you’re looking for a crank-starting powerhouse, the Jump-N-Carry JNC660 is worth looking into. This behemoth of a unit weighs in at a hefty 18 pounds but puts out a staggering 1700 peak amps of starting power. While it’s definitely not for those seeking a small, lightweight jump starter, the Jump-N-Carry will raise almost any battery from the dead. In fact, if this charger can’t re-start your SUV, your battery is likely toast.

While the price is higher on average, it’s worth noting that a professional-grade jump starter like this will usually run you a fair chunk of change. It doesn’t come with bells and whistles such as built-in air compressor or USB charging ports; it does, however, offer automatic recharging that other units lack.

You can simply plug in an extension cord (not supplied) and it will automatically reset itself to a charging state without intermittent recharging. And the long, 46″ cables ensure it will reach any unwieldy battery placement. So while the Jump-N-Carry is more geared toward extreme or professional car starting conditions, the extra kick it provides is definitely worth considering.

The Schumacher XP2260 Jump Starter offers 1200 peak amps and many of the features you’d come to expect in a charging unit but weighs a staggering 24lbs. It’s definitely not something you’d tote around in your trunk on most occasions, yet it offers up enough power to get nearly any SUV going in most situations.

The XP2260 comes with a range of features to complement its impressive power. In addition to an onboard air compressor, the unit makes up for its heaviness with a power inverter in the form of 12V A/C output in unison with a single USB port for providing power to multiple devices. The ability to offer both A/C and D/C current is definitely a bonus.

Ideally, the XP2260 would be of value to those who want to be able to power up RV’s and to provide electricity in situations where a generator may be of use. However, the weight of this jump starter is a drawback for many. Having said this, the XP2260 still makes our list of the best emergency jump starter.

Another pitfall of this unit is the amount of time it takes to charge it back up. The included charger is about the size of a cellphone charger and is only rated at 700 mA, or about the power equivalent of a few AA batteries. As a result, the XP2260 takes a long time to return to its full status once its power reserves have been depleted.

In the past, if you needed a bost you would have to find an obliging motorist and have easy access to jumper cables. It could often be awkward, especially if your vehicle was not parked in the right direction. Approaching strangers for a boost can be embarassing and sometimes you can get stuck in areas that are less than desirable.

With the advancements of batteries and the decrease in size & weight, portable jump starters have become extremely popular. Some of these battery packs have become so small that they can fit in your glove box and powerful enough to start most SUVs within a moments notice.

Most of the new generation emergency jump starters use compact lithium-ion batteries and are a fraction of the weight of previous models.  Some even allow you to charge your electronic devices or phones, which makes them extra convenient for travelling or road trips. Fancy ones even come with a USB port or flashlight that could be useful if needed in a pinch.