Strobe lights were originally invented to monitor the motion of fast moving objects. They would make it easier for the eye to focus on rapidly moving targets by casting a flickering beam of light that would turn on and off at insanely high speeds. In fact, if you own a modern LCD TV or computer monitor with “blur reduction” built into it, chances are you are already exposed to the effects of light strobes.

Below, we have listed some of the most amazing strobe party lighting solutions that you can find on the market. Each of these cater to different needs and budget ranges, so make your pick only after you know that the strobe light is going to fulfill all your needs. 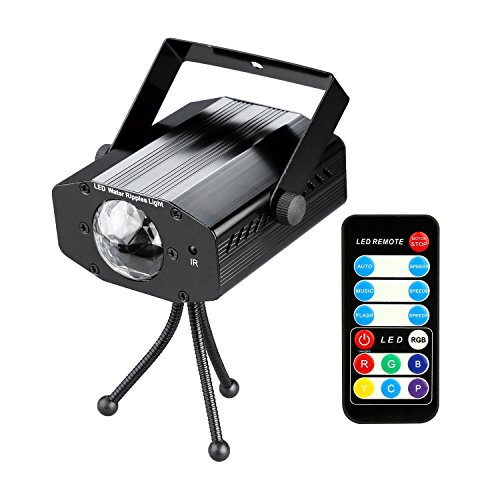 Despite its wacky name, the Vnina 7-color Ocean Wave Projector is actually one of the most interesting party strobe lights that we have ever seen. It does support 7 different color modes – red, blue, green, yellow, cyan, purple, and RGB. This stage effect-projector light comes with a handle and stand, built-in for convenient carrying and mounting, and you also get a LED remote control along with the big LED strobe light.

This remote will allow you to select from any one of the 7 various strobe modes, and you can also control the intensity of the strobe operation. There are three speed settings on the light – speed1, speed2, and speed3. Light strobes with lowest frequency at speed level 1, and flashes at its fastest speed on mode 3.

There are also three different operation modes built-in to control how the light reacts to changes in input, and those are – auto, music, and flash. This light is a perfect fit in almost any scenario that requires a multi-color strobe light. We’re talking about Christmas parties, Halloween nights, birthday parties, etc.

A sound activated strobe is not what you think it is. This is not like Google voice search in which you say something and the device responds appropriately, rather it is connected to a DMX controller via special coaxial cables that relay audio signals via the cable from your amplifier, and the light has been programmed to react in a specific way depending on the frequency and intensity of the signal.

Think of it more like the visual spectrometer that you find on music playback software, or in the stereo head LCD display of your car. The lights will react with changes in color and brightness based on the incoming sound signals, and they will also change their frequency based on how you program them to react.

Just like the Vnina, this one packs 7 colors for you to choose from, and they are red, blue, green, cyan, yellow, purple and finally, the entire RGB combination. The lifespan of this ultra-affordable unit is actually very good, as it is rated to function for up to 10,000 hours.

The light can be set up to react to musical input, and is perfect for dance shows, birthday parties, DJ nights, Halloween functions, etc. It even includes a wireless remote control with play/pause, volume up, and volume down built right in. For this price, there simply is nothing better. 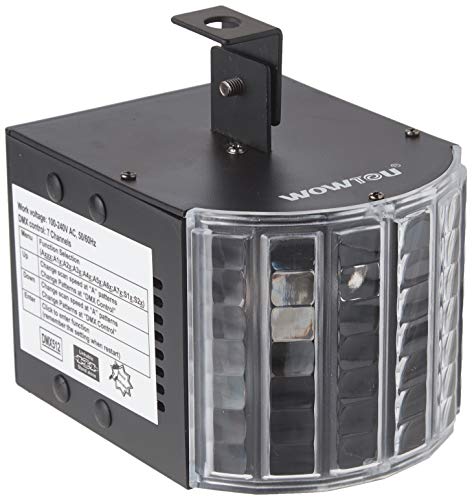 If you need a party strobe light that is capable of outputting bright and colorful beams even in hot environments, then take a look at this DJ light strobe array from WOWTOU. They cost slightly more than our previous entry, the budget-oriented Spriak lights, yet pack so much more in terms of functionality.

These are also sound activated, but the major difference is that power rating, which is nearly 6 times more than what the Spriak had to offer. We are talking 18w versus 3w here, and that simply means you will enjoy brighter, more vibrant lighting with these. Also, the higher power rating allows you to have more headroom to play with in hot or sunny climates where low powered LED arrays will simply lose a large chunk of their brightness due to the ambient heat.

And oh, these are RGB lights. The build quality is nothing short of excellent, and we simply don’t understand how WOWTOU managed to cram a flame-resistant plastic housing at the front on this party light. You can mount these onto the wall, ceiling, etc. with the help of a top mounted adjustable metal bracket. 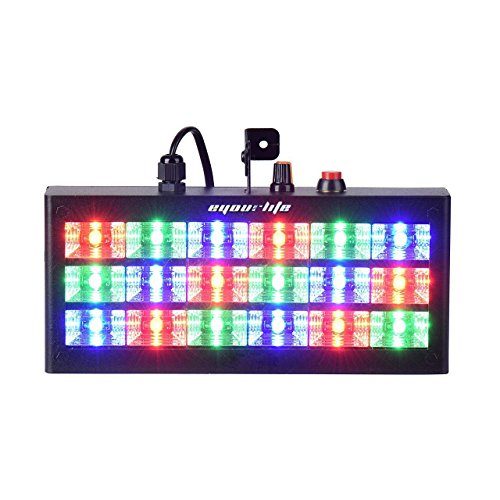 If you are shocked by seeing the power rating of the LED units on this one, so were we. But don’t worry – just because this light uses 60W LED diodes doesn’t mean that it is 4 times brighter than the previous model which only had 18W LED diodes on its panel. Larger LED’s emit more light and take up extra power, so you need fewer of them in order to generate the same amount of luminescence.

So while the brightness may be the same or even less than a light with several smaller LED’s, one thing does improve – the performance under high temperatures. Loss in power will be less apparent under sunny conditions if you have so much power to begin with in the first place.

The front panel contains only 18 of these ginormous LED diodes, and there are 6 of each color – red, green, and blue. These LED’s can be controlled via sound, and the entire product measures about 9.2” x 2” x 4” in size. Mean lifespan per unit is expected to be roughly 10,000 hours.

The backlight in modern LCD displays consists of LED’s that turn on and turn off at extremely fast rates to make quickly moving objects appear less blurry. However, LED strobes have also found their way into other parts of the entertainment industry. One of the most popular applications of strobe lights happens to be as a form of stage light, or a multi-color show light.

These can come in many shapes and sizes, and they are mainly used in places like discos, dance stages, etc. Ever been to a club at night? Well then, you must be familiar with the super high frequency LED lights flashing across the room, and these are basically strobes that turn on and off while simultaneously changing colors. They look really pretty and can set up the mood for a killer show or party.

But what is it that makes one strobe light better than the other? Well firstly, strobe lights are designed to perform in certain scenarios under certain operating conditions. That is why you have so many varieties of strobe lights in the first place. You can’t use a Christmas function strobe light in a disco, since that simply will not create the effect that you desire.

DMX compatibility is also a big deal, and you need to consider the following too – how many LED’s does it have, how many colors can it light up in, what is the size of the LED panel, how powerful are the LED’s, is it built to last, etc. Get a unit that fulfills your needs for now, without worrying too much about build quality and future expandability if you only plan on using the strobe light for this one time.

However if you’re going to set these up on a stage and plan on using them for the foreseeable future, then you better make sure that the LED’s are top notch and built to last. Get a strobe light that has a sturdy enclosure and proper DMX support so that you can change between colors and brightness levels even with multiples of these strobe lights daisy-chained together.

If these strobe lights will be used during the day, or if you plan on using them in a hot environment, try to get LED’s that are slightly higher powered since LED’s tend to lose performance as their ambient temperatures rise up.