Portable gas grills have come a long way since the days of the ubiquitous hibachi, offering a range of styles and features to suit your grilling needs while on the go. Lightweight, easy to transport and featuring a wide variety of grilling features, today’s products give you the ability to take the grilling experience with you nearly anywhere.

Whether it’s for camping, tailgating, or attending a picnic – these units will have you covered. Yet knowing what features to look for when making a purchase can be a challenging task as each product brings its own set of pros and cons to the table. To that end, we’ll take a look at some of the top portable gas grills and help to take the guesswork out of the equation for you. 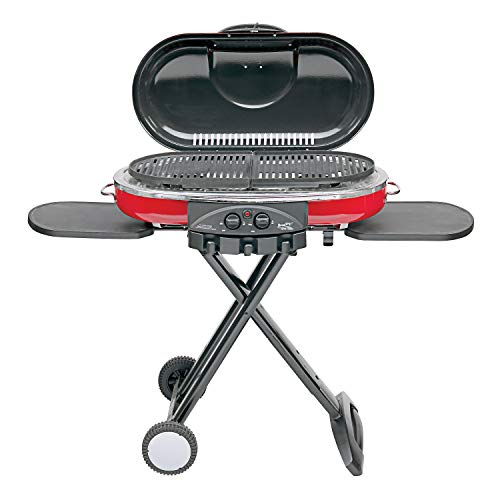 Packing 20,000 BTU’s of heat into a highly collapsible package is the Coleman Road Trip Propane Portable Grill LXE. The 48 pounds of weight are negated by the large back wheels and long pull handle, making it a snap to move around. It’s extremely compact in folded mode, and once extended into cooking configuration using the “lift and lock” system, it’s ready to use.

The LXE offers the ability to swap out cooking surfaces, meaning you can swap out the grill with a range of other cooktops including griddle and stove grates (sold separately), making it an incredibly versatile product. A matchless push-button ignition system makes starting it easy, and even heating is guaranteed thanks to the “PerfectFlow” technology. Tables slide out from either side of the grill, allowing you to hold and store plates and tools.

All interior surfaces feature coated surfaces making them extremely easy to clean, and it also comes with a detachable grease tray. The grill will let you cook for up to an hour on a single propane cylinder with a decent-sized 285 sq in. of cooking surface available, suitable for a party of between 3 and 4. It should be noted, however, that in some ways the grill is a little bit too powerful – some have complained that using the full 20,000 BTU’s of heat on the maximum setting can result in melting of the handles if left on for prolonged periods. Still, for powerful cooking on the go, the Coleman LXE makes for an excellent choice.

For more of a pared-down option when it comes to portable grilling, the Coleman Road Trip Party Grill is a worthy contender. While less expensive than comparable portable grills, it also sacrifices some of the bells and whistles featured on costlier models. Despite that, it’s a fully serviceable grill, offering up 8,000 BTU’s of heat – plenty for most cooking needs.

This model also incorporates Coleman’s “PerfectFlow” technology, as well as an electronic ignition for easy starting. Some users, however, have complained that it can be difficult to start in the wind, so finding a sheltered area is important when getting the grill going. Weighing in at a scant 5.8 pounds, it’s extremely easy to carry around, and will fit in virtually any vehicle with ease.

Another great feature is that the grill itself, as well as most of the components, are dishwasher safe, so it’s exceptionally easy to clean. The legs are detachable, and can be stored inside the grill for storage when not in use. Overall, it’s a great grill when on a budget, and despite the lack of features it’s still worthy of being considered as one of the top portable gas grills out there. 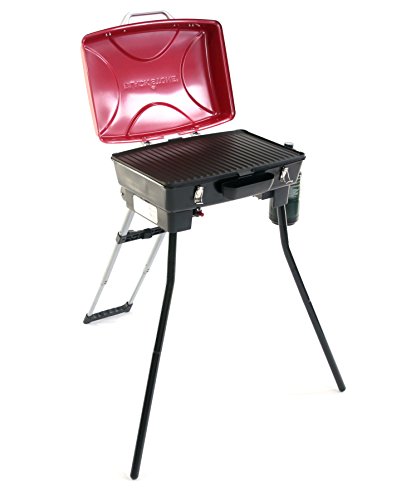 The highly portable Blackstone Dash Portable Gas and Griddle Combo makes cooking outdoors a cinch, owing to its flip-able, dual cooktop surface. Switch seamlessly between a griddle for breakfast foods and grill for all others. The unit folds into a convenient carry-case design weighing 18 pounds and features telescopic legs that will provide stability on virtually any surface type.

Not only does it incorporate a carry handle, but it also sports rollers that allow it to be toted around like luggage – especially good when camping. The 240 square inches of cooking surface is large enough to cook meals for between 3 and 4, and it’s powered by 7,000 BTU’s of heat. While cleanup isn’t as easy as with the Coleman LXE, it’s still fairly simple as the grill/griddle can be wiped down with a paper towel after use.

The Blackstone is becoming a popular item not only for its price that, while not exactly in the budget category, is still generally less than comparable units. And while 7,000 BTU’s of heat is considerably less than other competing models, the advantage here is that it allows you to use it up to 2.5 hours on a single propane canister. So even though it lacks such features as sliding shelves or push-start ignition, the Blackstone Dash is still a grill worth considering. 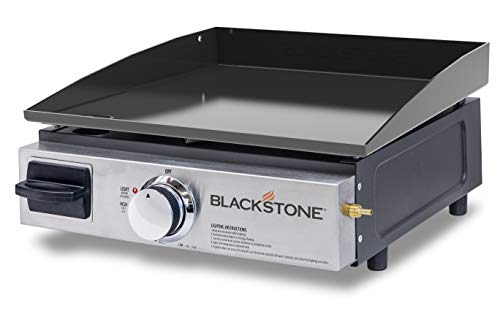 Another entry from Blackstone is the Table Top Camp Griddle. While lacking a dedicated grill option, the griddle is very portable and compact. Weighing 21 pounds, it features a cooking surface area of 260 square inches, and the griddle surface can be reversed for easy storage. Featuring a stainless steel H-shaped burner that purports to heat up quickly, the unit offers 12,000 BTU’s of heat, more than enough for outdoor cooking. It’s easy to clean owing to a removable grease tray, and it wipes down readily after use.

The lack of a grill add-on may be a hindrance for some, but the reality is that the griddle surface allows for a wider range of foods to be prepared, and it does so with even heating thanks to the placement of the heating elements. As such, the griddle should be properly seasoned before initial use, despite that fact that this is not mentioned in the instructions.

The propane cylinder should last between 1.5 and 2 hours of use, depending on the heat settings used. The Blackstone Table Top Camp Griddle has evolved into a popular choice among those looking to cook a wider variety of foods outdoors, and its popularity puts it squarely on the list of top portable gas grills. And while it’s a different style of grill, it’s still worthy of consideration due to its versatility and durability.

The success of your whatever you are cooking will ultimately be decided by the quality of your portable grill. Stick to brands that are reputable and provide a stable base to minimize the chance of tipping. Don’t purchase a grill that has sharp corners for safety reasons, especially when camping.

Hamburgers and hot dogs are easily cooked on most grills, but if you want to step it up a bit to delicate fish and mouthwatering steaks then you’ll need a grill with proper controls to vary the temperature. The quality and warranty on the burners are important because if you plan to keep your grill a long time, this part of the grill is replaced most often.