Cooking dried beans can be very time consuming and if you want them for dinner that night you don’t always have half a day to prepare them through traditional cooking means. Using a pressure cooker, you can cook beans in about an hour and have them ready for dinner that night. Digital pressure cookers are perfect tools for people who don’t have the time or patience to keep checking the stove every few minutes. If you are working a lot or have long hours, then you would greatly benefit from purchasing a cooker that has a delayed cooking function built in so that you can put in the ingredients in the morning, set the timer and go to work.

The cooker will begin cooking before your time of arrival, to ensure that when you get home, your food will be hot and ready to serve. Besides, many modern electric cookers come with several presets for various commonly cooked foods such as soup, chicken and fish. All you need to do is put the ingredients inside along with the water, select a preset and the cooker will select the right pressure and temperature to cook the food. Now, let’s take a look at our top picks for the best pressure cookers for cooking beans. We have carefully analyzed the features and have also listed the pros and cons of each device for you to make the easiest possible choice.

The Instant Pot Pressure Cooker is one of the most highly regarded pressure cookers on the market. Available in 5, 6 and 8 quart models, this 7-in-1 unit is a rice cooker, pressure cooker, slow cooker, steamer, warmer, it sautes and browns, and even makes yogurt!

Instant Pot’s control panel is large, intuitive and easy to use even for first timers. It comes with a stainless steel pot, steam rack, and recipes in multiple languages. If you love to make soup, stew, chili or rice then this pressure cooker will become one of your most loved appliances in the kitchen. It features dual pressure settings giving you flexibility to cook with very high pressure thus reducing your cooking time by 70%

A great feature of the Instant Pot Cooker is its resistance to finger prints thanks to its brushed stainless steel exterior.  The 24 hour timer is extremely handy giving you the ability to delay your cooking to exactly the time you require. If your family is like mine, then things can get very busy with various schedules and appointments, which makes it a blessing to have a hot meal ready and prepared the moment you get home. 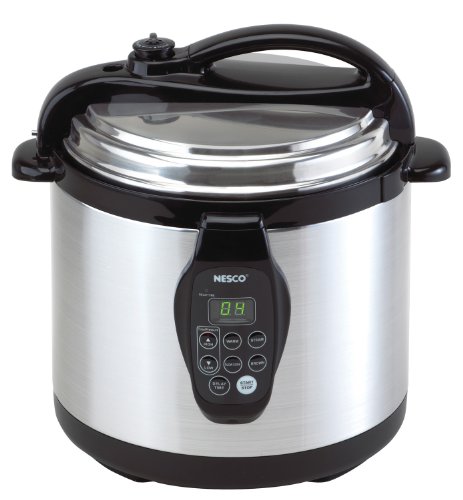 The PC6-25 is the most bang-for-the-buck digital pressure cooker on the market, due to its amazing pressure and durable stainless steel construction. It has 7-predefined cooking settings and one of its most unique features, that keep it ahead of the competition, is the fact that it can achieve a maximum pressure of 15psi, the same as a conventional stove-top pressure cooker.

This means that it cooks faster than other digital cookers, so for those of you who are accustomed to traditional cookers, the transition will be much easier since you know exactly how much water you need to add. It has an 8-hour delay timer, a non-stick removable cook pot and comes with a steam rack. While it does cook fast and is built very well, its only flaw is the faulty temperature sensor design.

If it goes above 128C, the fuse may melt off and short one of the power lines from the socket to the pressure cooker. But it can be remedied by purchasing an inexpensive sensor and installing it in the place of the defective one. It is designed to either release the pressure or lower the power to the heating coil as soon as it detects excess temperature while cooking. 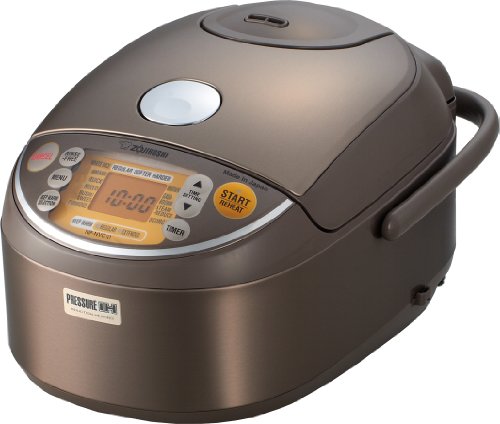 The Zojirushi cooks via pressure induction heating, a method similar to induction cookers, but this one generates heat inside a high pressure chamber. The result is that the heat is uniformly distributed throughout the food and every single particle is uniformly cooked. Despite its rather expensive price tag, this is a great cooker for serious rice eaters. It comes with cooking modes for white rice, brown rice and gaba rice.

One of its qualities that was extolled by numerous satisfied users was the fact that it can make rice as old as 2 days ready to eat, and fresh within a few minutes – something no other cooker can. While preparing brown rice, this machine easily beats its competition as it does not burn or overcook a single grain of rice unlike most conventional rice cookers.

There are options on the LCD to set it for a fast or delayed cooking time. You can also steam rice and cook porridge or mixed rice in it. One of the issues reported by some customers was that the platinum lined inner pot is susceptible to losing its non-stick layering if mishandled. You must take care not to scrub it with a hard brush, always use soft non-abrasive sponges and don’t spill any acidic fluids on it such vinegar or acidic cleaners. But that’s it, everything else works great and the cooker is Japanese made so you won’t have to worry about its durability. 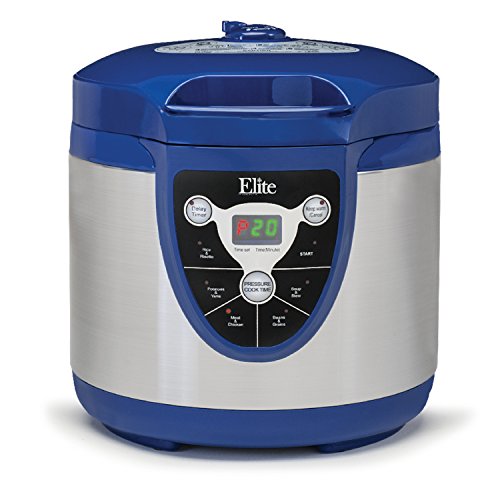 Elite platinum manufactures quality products and pairs them with even greater customer service. This pressure cooker features a lot of cool functions that will greatly simplify your cooking sessions and save a lot of your time. There is an impressive 9-hour delay timer that allows you to put the food in and the cooker will wait for up to 9-hours before it begins to pressurize. This is really useful for busy people who want their food ready to serve after a tiring day at office.

The 6 preset cooking modes include rice and risotto, potatoes and yams, meat and chicken, beans and grains, soup and stew, and warm/browning. That means if the food you want to cook matches any of the presets, then just pop it in and wait for the cooker to tell you when the job is done. Really useful for anyone new to pressure cooking, or people who are not familiar with digital cookers.

You can even brown/saute your meats in the pressure cooker, and the pot is a wonderful nonstick aluminum pot. Well, it would have been more than wonderful if the nonstick coating did not peel off, but mostly it is due to people not knowing how to handle the pot while cooking or cleaning. You need to maintain extreme care while washing it, use soft sponges and non-acidic cleaners only. Or, you can buy an affordable aftermarket pot for the pressure cooker. 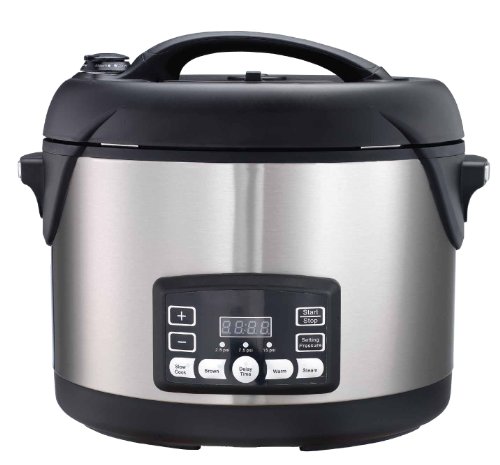 This Big Boss Pressure Cooker has lots of pressure with options to set on low pressure (2.5 psi), medium pressure (7.5psi), and high pressure (15psi), along with an 8-hour delay mode and auto warm feature that keeps your food warm for up to 8 hours after it has finished cooking. It holds 8 quarts of fluid, more than enough to create soup or stew for a family of four.

The exterior is all stainless steel, and it is cold to the touch meaning that even if you touch it while the cooker is functioning you will not feel any heat. The reason some people had issues with this cooker is because the top lid is sort of hard to fit on correctly, but with some time you will get the hang of it.

While it sounds fairly straight forward to now cook your beans in a pressure cooker, there are some things to keep in mind. The volume of dried beans will double in size after being soaked and cooked, so make sure you do not fill your cooker more than half way. Use enough liquid to cover the beans and soaking the beans (if possible) can speed up the cooking process even when using a pressure cooker.

There are some things that you will need to know before you purchase a pressure cooker. If you have never used a digital pressure cooker before, and are only accustomed to stove-top pressure cookers than the transition will take some getting used to. However it is much simpler to go from stove-top cookers to digital than go from digital to stove-top. The reason is that with a digital cooker almost everything is automated, and you carry on with other household chores while the cooker does its job.

Digital cookers distribute heat more efficiently, hence they are more energy efficient than a conventional pressure cooker, although they are limited to running on electricity only. While purchasing a new digital pressure cooker, you must check the following things- what is the capacity of the cooker in quarts, whether it contains a non-stick interior or not, and how thick is the inner cooking pot.

Thicker cooking pots with stainless steel construction are the best as they are more durable and less likely to deform under high pressure. Nonstick pots will lose their nonstick coating if you don’t handle them properly, although they are much easier to clean and food doesn’t stick to the base while cooking. Always go for a durable digital cooker over a fancy one, because that’s where most digital cookers fail as their electronic circuits get shorted by water spillage or the heat sensors burn out.